Today was a day off from dealing with motorbike accident stuff, and a time to do some sightseeing in Ankara.

I spent last night in a hotel arranged for me by BMW. It’s cheap, but it also miles away from the centre of Ankara. Helpfully, non of the staff speak any English. So even asking where to catch a bus, what number to look for, even understanding the names for where I want to go to ends up in the now usually way of turning to the Google Translate App. Still, I managed to get the right bus about 1km from the hotel. And even though I missed my stop, the conductor and driver arranged for me to jump on another bus to go back to where I should have got off!

The citadel stands above the city and has done so for hundreds of years and is one of the tourist highlights. So, I can clearly see it and the road that leads to it (not my picture, taken from the web, my camera cable is in a box at BMW)

But could I get to it, could I eckers-like. The road just disintegrated into soil and ended in a dead end and an angry dog. It wasn’t just me either, there were a group of 10/15 Turkish people as well trying to find it. Foiled.

So, next attraction to tick off, Atatak’s Mausoleum.  Except that Turkish people don’t call it that, so none of the road signs or street maps made sense. Locally it is know as Anit Kabir. Ataturk is said to be the founder of the modern Republic of Turkey – in fact his surname means ‘father of the Turks’.  His mausoleum is suitably impressive, perched on the highest hill of the capital 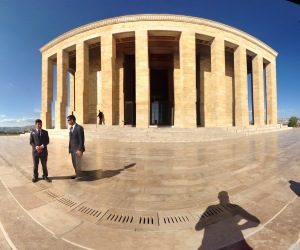 Walking back into Ankara I found a lovely park with some kind of international festival going on. It took me back to the days of organising Old Trafford Party in the Park. Except that the countries on show were local / relevant to Turkey rather than the UK  – so Albania Tourism on show, even Visit Afganistan were there, countless African nations, the Palastine stall was, erm, interesting (not sure that lad would get away with that outfit in the UK) and the stars on stage were rapping about their love of Pakistan. 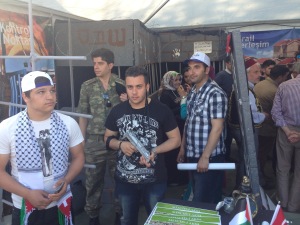 The park itself was great – Genclic Parki (Youth Park) http://en.m.wikipedia.org/wiki/Gen%C3%A7lik_Park%C4%B1 half of it is free, public open space with fountains, gardens and under canvas children’s play area and half of it is a funfair – big wheel, one of those launch / free fall things that India loves, and spinning rides. It was an unexpected and pleasant surprise. Made me think, ‘why haven’t we got one of these in Manchester?’ OK, we have a big wheel in Picadily gardens, but nothing like Genlic Parki.

I don’t think I’ve mentioned this so far, but for the fifth night in a row I had Pide for tea, and I’m fed up of it! It’s a Turkish version of pizza – except it is shaped like a rugby ball and doesn’t have a tomato sauce base layer. They are delicious, but I’ve had enough! I need some decent veggie food, soon. 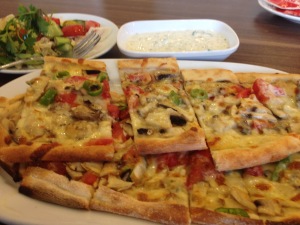 Before I went into the Kebap & Pide shop I went into one that advertised ‘pasta’ but it turns out that this is the Turkish for sweets. Still, while i was there I treated myself – because I’m worth it. 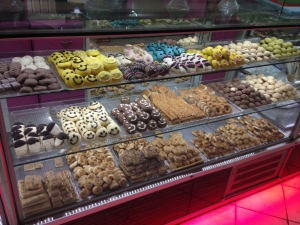 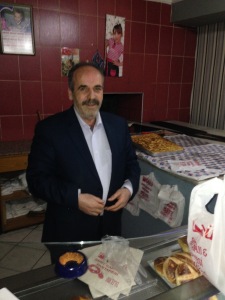