A few months ago, I wrote in the planning section:

This is it, the whole point of the trip… I have wanted to ride this area since reading articles by Damon I’Anson in Bike magazine back in 2005-6 – so you could say this trip has been 10 years in the planning. It feels like a millions miles away from Manchester…

And today’s the day Friday 19th June 2015. The day I finally rode the highest motorable road in the world. OK, there are some who claim there are higher roads – but often these are military roads where you need a permit that can only be gained by having friends in high places, or that you can only get to by lugging your bike across a lot of off road to get there. Khardungla is a road, a proper road and you ride proper roads to get there, and I’ve ridden a LOT of roads to get here (4500 miles across Europe up to my crash in Turkey, then 1000 miles in India).

But at the time I was limited to only posting photos from my phone, so, here are more and better pictures.

Half way up there’s a great spot for photos. As the saying goes, there’s enough blue to make a sailor a pair of pants. 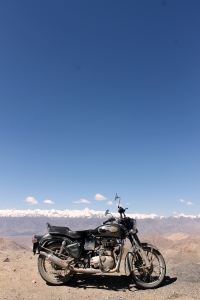 And the wiggly line gives you some idea of the terrain we had to ride to get there. 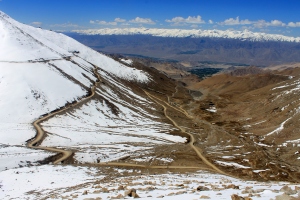 There are a number of ‘gates’ on the way up. I suppose they are just rock formations that have been left behind after the dynamite and bulldozers have done enough to clear a road. 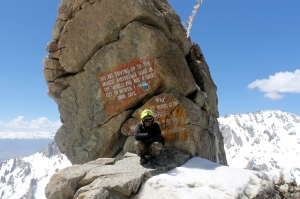 Caught in the act – selfie alert! 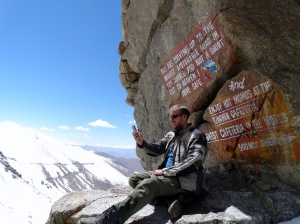 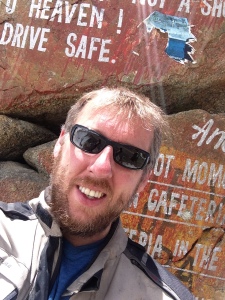 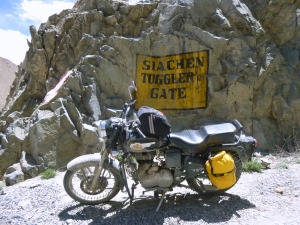 Once at the top, its like Bedlam. I always thought it was just a small sign and a small shop. Maybe it was, Once Upon A Time, but these days, well, several signs, a memorial, two (maybe three?) cafes, a souvenir shop, a museum…. oh, and lots of other people, trying to make it to the top. 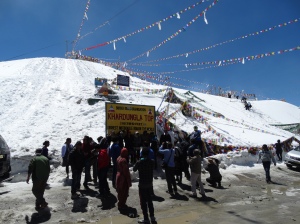 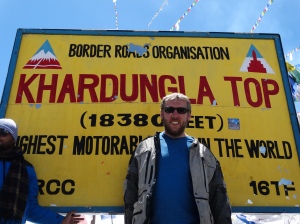 Visitors are advised not to spend more than 30 minutes at the top because of the potential risks of altitude sickness. But given that I had spent so long in the region and had done several 5000m passes already I was ok and we must have spent an hour or so up there. I even made it higher than the highest road by climbing the hill… and look, there’s Wally! 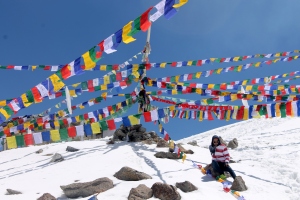 And another selfie…. the gormless look might be down the the lack of oxygen! 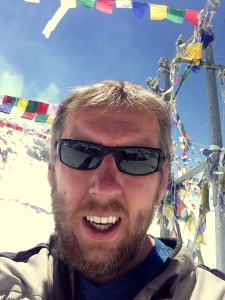 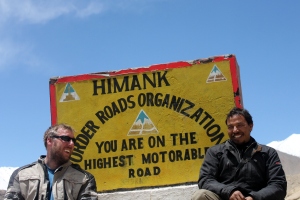 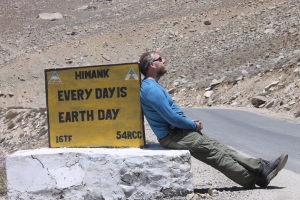 And this final one, Because We Must  (thanks Scott) 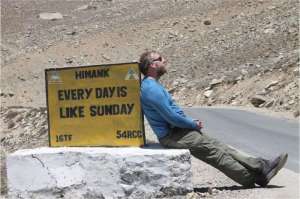