Weather today has been glorious, and so have the roads.

I’m not a militarist or a nationalist, but given that I was passing so near to Ypres it would be wrong of me not to visit the Commonwealth Cemetery to pay my respects. So peaceful, but so horrific. The number of tombs for which there is no name, and the number of names on the walls who don’t have a grave because there bodies were never found is a sobering experience – ‘Their name livethfor evermore’

Whilst I was in Ypres, I found a cool bike shop….

On to Wasmes and Cuermes to see houses that Van Gogh lived in. Couldn’t find the first, but the second was stunning (must clean the dust off the lens). 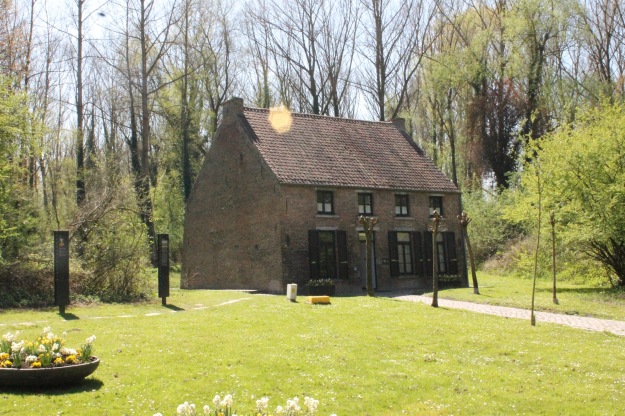 I’ve no idea where I learned about Castle Vianden (a book, a blog or a forum somewhere). The road into and out of the town is simply stunning. If you are ever in the area go and visit… I’ve shot a video (which I won’t post here) where in 5 minutes of riding some of the most fabulous roads I’ve seen, I pass three cars heading in the opposite direction. Just can’t imagine that in the UK.

I didn’t get the chance to go to the Nurburgring (maybe next time). Once inside Germany, it was mile after mile on the Autobahn – many don’t have upper speed limits, sometimes you have to slow down to 130kmph for a junction. Bonkers. Spent the night in a cheap hotel in Darmstadt, just south of Frankfurt.
446 miles for Day 2 – crikey.