It’s been 30 years since I was last in Porec. Unsurprisingly the place has changed and my memory isn’t as good as it used to be. I found the marina, which smells the same as I recall. There’s a photo in a box at home of me fishing off the jetty at the far end of this photo.

Anyway, can’t hang around all day reminiscing, there’s miles to be ridden and stuff to see. The plan was to get to Split, and I had a couple of points of interest on the way. First one, Mount Uckaa; apparently it’s really nice, the ride up was great, the long tunnel was great, but what met me on the other side wasn’t. Peter Kay would describe it as that  drizzle that gets you wet. Back at home it would be ok, but I’m on my holidays I didn’t order this. 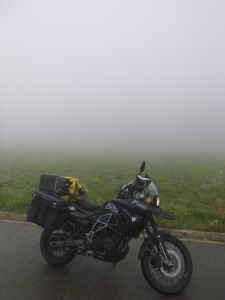 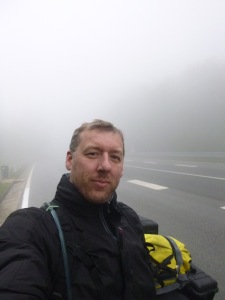 The ride from Ucka to Rijeka was grim with visibility only a few meters, but it cleared soon after Rijeka as I took a route listed on my planning map as ‘alternative rout to Zadar’, but should be renamed as ‘take this route, it’s stunning’. I rode the Almalfi Coast a couple of years ago, which was great, but I’d list the E65 as better, far better – beautiful coast line, switch backs, smooth, smooth Tarmac and importantly no traffic. Over 100 miles of coast hugging, it took hours, which is why I only made it to Zadar and not Split. I even got the chance to do a bit of off reading – which at the time was fun, but looking back was bl**dy stupid – no armour, loads of luggage, and a bike that I’m relying on to get me to the Himalayas.

I took the chance to play with my gorilla pod and remote control for the camera – it’s nice, but not quite right, I’ll try again…

I got to Zadar just before sunset, the guy at the apartment told me the highlight of a trip to Zadar was to watch the sunset from the old town, so I scooted off to catch it. At the end of the old town are some steps that sing as the waves hit them, and a solar power lighting display

Finally, just for Nethen (coz I know he’s reading) he is most looking forwards to photos of food with rude names, well how about these for starters:

Frozen veg that makes you I’ll 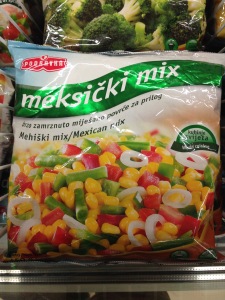 3 thoughts on “Day 7: The rain that flattens my hair”