A fairly leisurely day, solely in Greece, moving towards the Turkish border, where the adventure starts…

I’d stayed overnight in a lovely hotel that is just in the wrong location. If it was in a major tourist area it would be full all the time, as it is, it’s in a tiny village, a few miles of the motorway, and I was the only guest. It was also Labour Day so the owner had given the staff the day off… Which meant I was met by the owner, shown my room and then escorted to the only restaurant in town where she ordered for me (once she understood what being vegetarian meant!) and then chatted with me while I ate. It was all lovely, as it turns out it was the third night in a row where I’d been the only guest in the hotels I’d stayed in, I hadn’t had a conversation with anyone for 3 days other than ones that involve pointing at things and nodding. Anyway, if you find yourself in the greater Thessalonika area and need accommodation, I’d recommend Polys Hotel in Katachas http://www.booking.com/hotel/gr/polys-guest-house.html

Today’s route was all on the E90 motorway, only made exciting by having a 130 kph speed limit. But I stopped off in a few places to break up the journey.

First stop, Thessalonika (Thessaloniki). It has a lot in common with Manchester: it’s the country’s second city (shut up Birmingham, we all know it’s Manchester these days), it’s up north, and if today was anything to go by, it rains, a lot. There’s a huge statue of Alexander the Great on the harbour 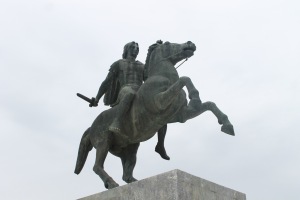 On a good day you can see mount Olympus (today wasn’t a great day though), trust me, it’s there.

The main tourist attraction in town is the White Tower (note the long queue of people trying to get in, behind the tree on the right), funnily enough, when it was raining later, no one was waiting. Wonder why?).

Next stop, Kavala.not much of note in this town other than a castle and a huge viaduct 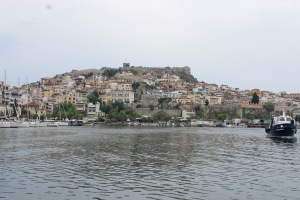 I stayed in Alexandropolis. The hotel I’d booked turned out to be a building site. They offered me an appartment a few streets away, but it looked like some students had just moved out so I refused it. I ended up in the hotel next door and I think I was the only non-Greek person in the hotel. I spent more than an hour looking for something vegetarian to eat; the town just had bars that serve kebabs, I went into two restaraunts where they looked at me with pity and said they could make me a salad if i wanted. I eventually found a pizza place. So, for about the 10th night so far I had pizza for tea. Not a great advert for European veggies 😕