I don’t have the mojo to write up two posts for what were, in the main, pretty dull slogs through a 1000 miles of Turkey and that ended in dreadful events…

Landmark on Day 16 was crossing the Bosphorus bridge, over the river Bospherus, into the Asian side of Istanbul. I looked wistfully it it last year when we took a ferry ride underneath it, now I did it properly, on a bike, heading East. 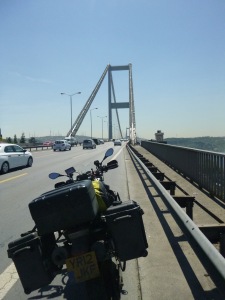 The rest of the day was only really memorable for running out of petrol on the motorway (all the stop, start, stop, start traffic in Istanbul gave me the worst ever tank range and only 30 miles on reserve – I normally get 40, sometimes 50+). Within seconds another biker stopped to help. He didn’t speak a word of English but he offered to ride to a fuel station and get me some fuel. I gave him €10 and good to his word he returned 10 mins later with a 5 litre water bottle full of petrol. Bikers the world over will help other stranded bikers. Well done, un-named random biker 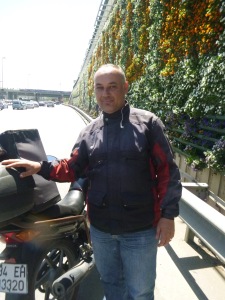 I spent the night in a town called Yozgat. Only interesting to me because it was 400 miles from Istanbul and on the road to the Iran border. But, and it’s a big but, it was the most bizarre hotel I’ve ever stayed in. Firstly, the road leading to it stopped and became builder’s rubble, unpassable for cars, but my off road bike coped admirably. Then the hotel itself, it was huge (100 rooms I guess) but there were only 5 guests – and 3 of them were contractors working on the road. I was given a standard double (which is what I booked) but a few minutes in the room the bell boy came and took me to another room, the biggest suite I have ever seen – bedroom, dining room, living room, 2 TVs, and a bath (the first I’d seen since leaving home). No explanation why I’d been upgraded, but I was very grateful. 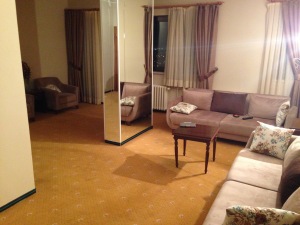 I asked if there was any chance of getting anything to eat, to be told that the restaurant was open. 5 guests and the restaurant was open – bizarre. I asked for anything vegetarian…. And the waiter looked at me in horror… The manager was summoned… He asked what I wanted and we settled on an omelette. To be honest I could have eaten a horse (a Quorn one). I ended up with soup, chips, omlette, a limp salad (left over from breakfast) and a plate of what must have been all the veg they had in the kitchen, sliced and smothered in tomato sauce and some white stuff (no idea what).

Corridors in the hotel were completely dark, with motion sensors activating only when you got half way down. I kept expecting to find That kid from The Shining riding a tricycle around the place 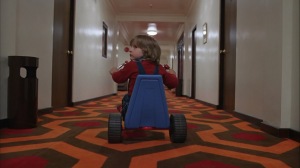 Still, fantastic view from the balcony at night

And in the morning

Day 17 was a 600 mile blur (200 miles and 2 hours too long for my liking to be honest) only lightened by a petrol station guy washing my bike with a broom and then cleaning the dead flys off my helmet with the same brush.  Top work fella! 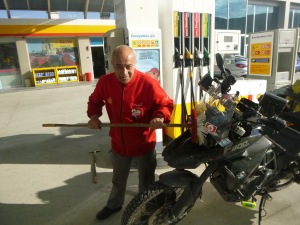 There were some great photo opportunities at dusk of chasing shadows.

The day ended with 2 hours of darkness and unbelievable cold, and then catastrophe