Back packers, thrill seekers and honeymooning couples flock to Manali in their thousands every year to soak up the hippy vibe, go trekking, paragliding, rafting, skiing, or enjoy the 4 and 5 star romantic hotels. Not being a back packer, thrill seeker or honeymooner I originally wanted to give the town a wide berth and avoid the crowds, but in my revised trip, it is the place I pick up my hire bike and guide for the next few weeks.

I spent most of day 5 (Thursday 4th June) sat in a small taxi travelling from Dharamsala to Manali – 7 hours plus travelling the 250km or so. It gave me plenty of time to study the rules of the road – yes, there are some – generally in India size is king, the bigger your vehicle the more right of way you have, so trucks and buses out rank cars and motorcycles, pedestrians have no chance. Only cows break this rule – if a cow is in the road, everyone stops, swerves, avoids. The other thing that is king is the horn – preferably an after market loud one. My taxi had two horns – the standard one on the steering wheel and a second one that made a higher pitched tune. The horn is used to indicate when you want to overtake, it is supposed to tell the person in front to move left, to give you some room and allow you to pass. It is also used to let someone know you are there and that you are about to claim right of way, whether there is any logic to it or not is irrelevant. So, turning right into traffic – use your horn, joining a busy round about, use your horn, pulling out to overtake a vehicle even though someone is overtaking you, use your horn.

We found Manali easily enough, but we were actually looking for the village of Old Manali a few miles alway. It took more than an hour to get there, stuck in crawling traffic – buses, cars, trucks, 4×4’s, rickshaws, motorbikes,  pedestrians and cows all trying to move around on tiny roads barely wide enough for one vehicle. It defies logic and physics, but still everyone uses their horn…

My hotel is lovely – the Himalayan Country Hotel. It is at the far end of Old Manali, nothing beyond but mountains. If you are brave, it is apparently a 10 day trek over the mountain back to Dharamsala – so, not much slower than the taxi! It is next to some old traditional single story houses occupied by families who have lived there for generations. Despite its remote location I have the best wifi I’ve had in India, the food is excellent, beer is always available and the place is spotlessly clean – it ticks all the right boxes.
I met my guide that evening, Moti.  Or “Mr Moti” as he was described to me via email. But, Moti, once I meet him. He is an experience guide – both trekking and motorcycles – a ‘Mountain Man’ who was born and raised in the mountains of the area. 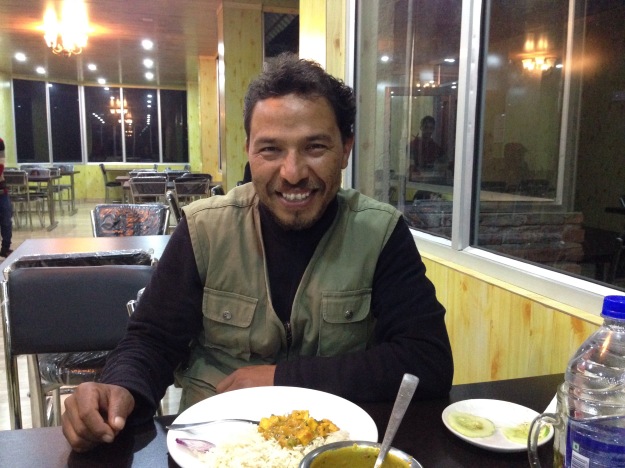 Day 6 my bike is delivered. A 500cc Royal Enfield Bullet. Enfields were originally built in England, but when the company went bust in the 1960s the factory was bought up and moved to India so that the government could supply spare parts for the thousands of bikes they had bought for the Indian army,  and they are now synonymous with this country. 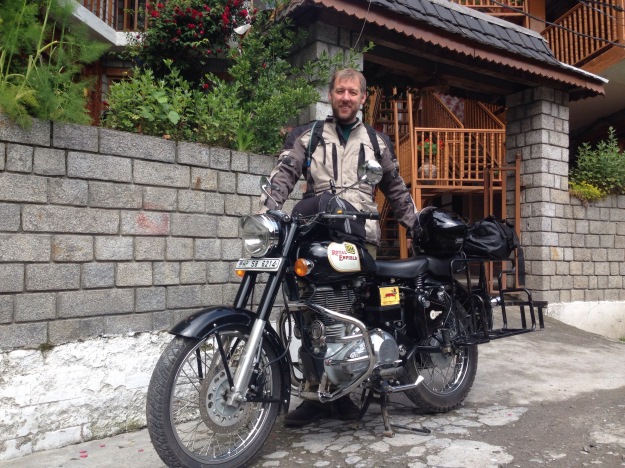 We went for a short ride – 60km to Naggar and back – enough time for me to get used to the bike, see if there was anything wrong with it that needed adjusting or fixing, and for Motti to see if I’m a good enough rider. Thankfully, the bike is a doddle to ride (all the levers, controllers and pedals are in the right place), nothing needs fixing, it’s not possible to adjust it to my size ☺️ and I pass the test with a thumbs up – the last few years of off roading will definitely come in handy as Indian roads are generally terrible and Himalayan roads are prone to just disappearing into rocks and stones as the tarmack has been taken away in a rock slide or bad winter.

Naggar castle was interesting, but not as interesting as learning that the village next door, Malana, produces the best marijuana in the world! 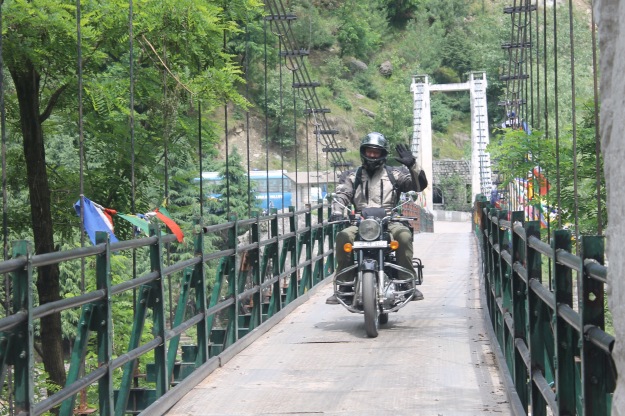