Day 9: To Kalpa – 140 km.
The road to Kalpa is laughingly called National Highway 5, the Hindustan Tibet Highway – the word ‘highway’ suggests something… Tarmac at least. But this road must be one of the worst roads I’ve ever ridden (Albania, all is forgiven), huge lengths of it resemble the surface of the moon – dust, rocks and craters – Tarmac is a scarce commodity on this road. There are photos of some stretches of road in the write ups for days 13 and 14 (hotel wifi doesn’t like this many photos…)
Kalpa is said to have been the place where Shiva spent her winters, so there are a few temples and shrines in town. Early evening I spend some time on my own walking around the town, visiting temples and sneaking into the school grounds. 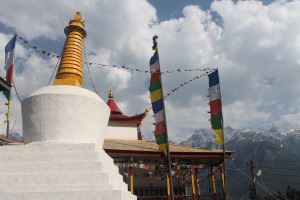 Again, the views from my hotel window were stunning – this is Mount Kalaish, all 6050m of her 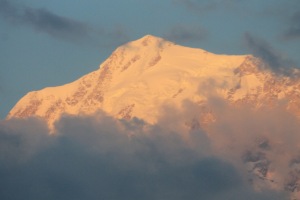 Day 10: To Tabo – 180km 8 hours
Today sees a milestone in the trip, my final country, forget what the Chinese think, I’m visiting Tibet today, the bit that India looks after, rather than the bit that China occupies. It means heightened security and the need for an ‘Inner Line Permit’ that my motorbike company has sorted for me.
(Photo of permit?)
If you follow the ‘Where’s Dave?’ Map you will see we had lunch in a town called Nako, but we visited again a few days later, so I’ll cover it all then.

The highway reaches a peak at Malling. Chris Scott described them as ‘the famously unstable slopes of Malling’ (my guide says they are 4000m but I need to check this out) whatever the height, it’s definitely the highest I’ve ever been.

Parts of the road go within about 15 miles of the Chinese border. Apparently, on the other side of these mountains are dual carriageways used by China to move weapons about. At the checkpoint at Sumdo there is a sign with a road map on it, there is a road marked ‘no road’ the guidebook says this is a road to China.

Soon after Sumdo we take a turn off for Giu. Motti has never been before, but I’d read about a small Monestary with the mummified remains of a 500 year old monk which caught my attention.
Turns out the Monestary is still being built (although no sign of any builders on the day we were there).

To gain access to the small building with the mummy you need to go the the nearby village and ask a monk to let you in, so Motti went off to find the said Monk.

This soldier appeared from somewhere to check me out… He’s the last line of defence between India and China.  I signalled (from a distance) for a photo and he obliged, which was nice. He approached us later and was very friendly, posing for (closer) photos, even giving me his gun to pose with – he asked me not to post the pictures online, so, out of respect, I won’t do.

Motti returned with a boy from the village, I guess the Monk didn’t fancy it, and he let us in. The mummy was discovered by police making a road in 2004, apparently blood spurted from him when he was moved…

I visited Tabo Gompa the next morning before we set off. Unfortunately photography isn’t allowed inside (I bought some postcards, so might scan and upload when I get home). The place took my breath away. The building is made of mud and is over 1200 years old, there are statues inside which are both beautiful and disturbing at the same time. I’m sure there’s an innocent answer, maybe I need to find out more (www.tabomonestary.org)