The plan was to pootle around Lake Como this morning, visit the MotoGuzzi factory on the way around and then make my way over to Trieste near the Slovenia border via Lake Garda. Well, that was the plan, but it changed at breakfast when I saw a Yamaha Tenere parked next to my bike and then met the rider, Rob. Rob is in the second week of a 2+ year round the world trip – Europe, east into The Stans, Russia, Mongolia, across to Canada, then south to Argentina. He tried it two years ago, but had to be flown home when he broke his leg riding off road in Mongolia. Brave lad, and only 25 years old. Rob has a blog http://www.memybikeandi.co.uk/ and a more active Facebook page https://www.facebook.com/pages/Me-my-bike-and-I/869721646402771?fref=ts check him out.

His plan was to ride slowly around the lake and go to the Guzzi factory when it opened at 3. He’d done his research, I hadn’t. We agreed to ride together for a bit to see how it went, and ended up riding all day, going to the Museum and then staying in the same hotel. 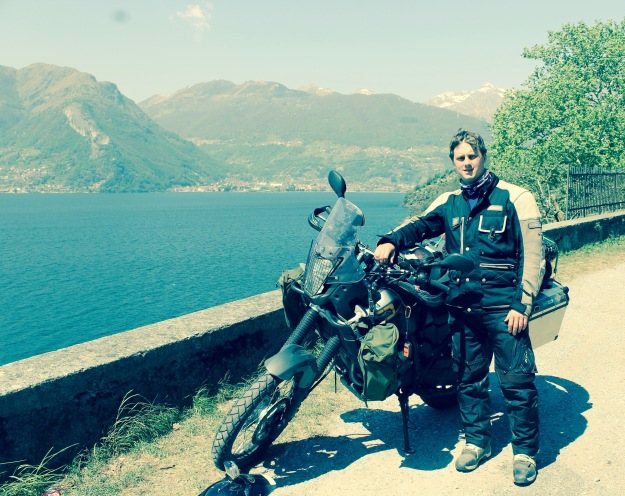 The museum was a bit of a let down really, no guide, just a number of rooms / corridors with old bikes in them. Think we were both hoping for a look at the factory, and a guide who could tell us about some of the bikes. Still, there’s was another, unexpected, Bond sight (Diamonds Are Forever). Bonus!

I did learn something new, BMW didn’t invent The Beak, Guzzi did!

Rob’s on a different kind of trip to mine – I’m constrained by time rather than cash, he has loads of time but little cash. He’s trying to live off £75 a week (plus petrol) but I’ve spent that money most days on food and hotels. I did my bit for his budget by buying his tea – good luck Rob, I’ll follow your trip with interest.